More Than Just Mosaics: The Ancient Synagogue at Huqoq in Israel’s Galilee 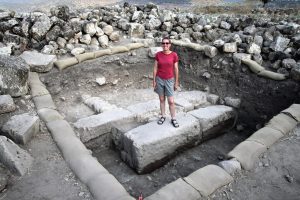 Since 2011, Professor Jodi Magness has been directing excavations in the ancient village of Huqoq in Israel’s Galilee.The excavations have revealed the remains of a Late Roman (fifth century) synagogue building paved with stunning mosaics, including the first non-biblical story ever discovered decorating an ancient synagogue. In this slide-illustrated lecture, Professor Magness describes these exciting finds, including the discoveries made in last summer’s excavation.

This event is free and open to the public.

This event is part of the Schochet Family Series on Jewish Culture and Life. This series is generously funded by Barry and Jan Schochet in honor of their parents, Sidney and Mary Schochet, who dedicated their lives to fostering the Jewish community in North Carolina and sharing their passion for Jewish culture and history with citizens of all faiths. Carolina Public Humanities is proud to continue this work by bringing the series to community colleges throughout the state.