Pre-registration is required for this free, online Zoom lecture. Sign up on Eventbrite… all “ticketholders” will receive the Zoom link via email a few days prior to the event [and again a couple hours prior to the event]. If you don’t have an email with Zoom instructions by the afternoon of November 16, please check your junk/spam folder. If you still don’t have an email from Eventbrite, please contact us at jewishstudies@unc.edu. This event features a 20 minute talk followed by a question/answer session.

After the fall of the Ottoman Empire, the region’s historic Sephardi Jewish population became dispersed around the globe, with many emigrating out of the Levant and seeking new shores in Europe and the Americas. In 1930s Paris, where over thirty thousand Ottoman Sephardi immigrants had resettled, a group of community leaders took it upon themselves to remedy what they saw to be the problem of Sephardi fragmentation by creating a central organizational body: the Universal Confederation of Sephardi Jews. By reconnecting diasporic nodes from London to Cairo, and from Buenos Aires to New York, the Confederation’s founders hoped to maintain Sephardi culture and identity, defend Sephardim against rising antisemitism, and exert influence on the global Jewish stage. In particular, they believed that coordinating the diaspora would enable Sephardim to participate in the Zionist project as a unified front, and to articulate a distinctly Sephardi form of Zionism. Yet, while the Confederation’s leaders sought to establish a broad transnational Sephardi movement, they also articulated a Sephardi past, present, and future that was intimately tied to one country: France.

Robin Buller is a PhD candidate in UNC’s History Department.

Co-sponsored by the Association for Jewish Studies. 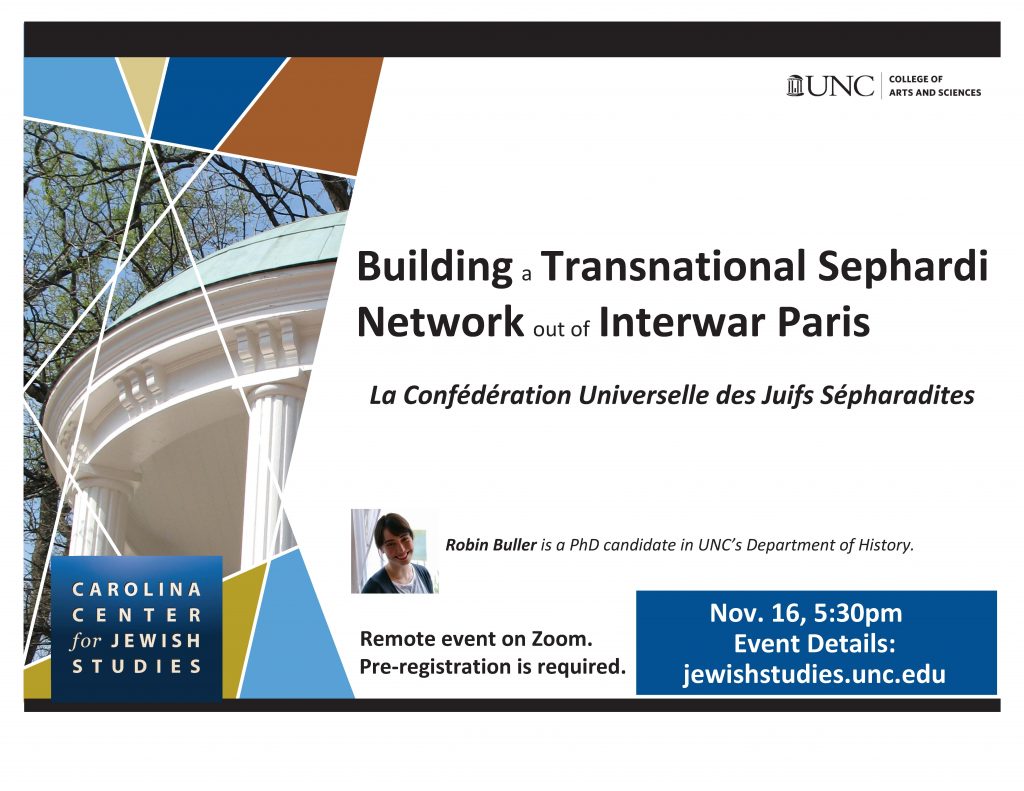