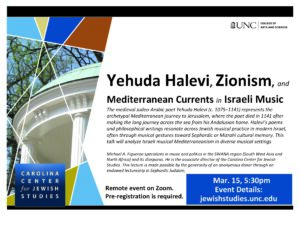 This event is free, open to the public, and will be held via Zoom.
Pre-registration is required, please visit Eventbrite to sign up.
The Zoom link will be emailed through Eventbrite to “ticketholders”.
Contact jewishstudies@unc.edu if you encounter any difficulties.

The medieval Judeo-Arabic poet Yehuda Halevi (c. 1075–1141) represents the archetypal Mediterranean journey to Jerusalem, where the poet died in 1141 after making the long journey across the sea from his Andalusian home. Halevi’s poems and philosophical writings resonate across Jewish musical practice in modern Israel, often through musical gestures toward Sephardic or Mizrahi cultural memory. This essay analyzes Israeli musical Mediterraneanism in diverse musical settings of Halevi’s poetry by Nechama Hendel, Etta Ankri, Ruchama Raz, and David Menachem, in order to demonstrate how crucial those texts—and by extension, memories of al-Andalus more broadly—have been to the reimagination of exile in Israeli modernity. In musical settings of Yehuda Halevi’s poetry, Mediterranean gestures function as signifiers of temporary exile, retroactively casting Halevi’s poems as prophecy to be fulfilled by Jewish settlement of Palestine/Eretz-Israel in the twentieth century. Ultimately, Figueroa argues that sonically re-casting Halevi into exile paradoxically affirms the bond between Jews and the territory and the bond between Jews and the lands where they found themselves in exile around the Mediterranean region.

Michael A. Figueroa (assistant professor) specializes in music and politics in the SWANA region (South West Asia and North Africa) and its diasporas. He is the associate director of the Carolina Center for Jewish Studies.