A Message from the Dean’s Office, College of Arts and Sciences

I am pleased to share that Professor Patricia Rosenmeyer will be the next director of the Carolina Center for Jewish Studies, effective July 1. Rosenmeyer will hold the Seymour & Carol Levin Distinguished Term Professorship while director. 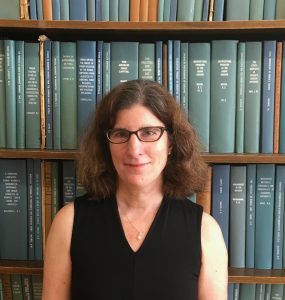 Rosenmeyer is the George L. Paddison Distinguished Professor of Classics and has been a member of the Carolina faculty since 2017. She is a scholar of Ancient Greek literature; her recent book The Language of Ruins: Greek and Latin Inscriptions on the Memnon Colossus (Oxford UP 2018) examines graffiti on the statue for what they reveal about the people who visited it in the first two centuries CE. Rosenmeyer is currently co-editing a volume on modern Jewish engagements with Greek and Roman classical texts; in 2021, she organized a three-day international symposium on Modern Jewish Receptions of Classical Antiquity, including her own biographical research on two German-Jewish refugees who studied classics while in internment camps during World War II.

On our campus, she worked with colleagues in Classics and the “Countering Hate” initiative to host a performance at the Stone Center by the Medea Project’s Theater for Incarcerated Women. She has served on fellowship committees for the Center for Jewish Studies, and in 2021-22, she chaired the Center’s faculty event planning committee.

I am so grateful to Ruth for her unparalleled leadership of the Carolina Center for Jewish Studies since 2013. Under her guidance, the center organized its first major international symposium, Reconsidering Antisemitism, in 2016, partnered with the department of music to perform Defiant Requiem: Verdi at Terezin and a related conference on trauma in 2017, created the popular one-hour course “Confronting Antisemitism” in 2020, and continued to offer its robust public programming during the pandemic with virtual events. More than 20 faculty representing 10 academic disciplines are now affiliated with the center. She will, of course, remain part of the center and will resume her research and teaching in her home department of German and Slavic languages and literatures.

College of Arts and Sciences