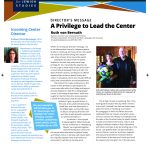 Director’s Message: A privilege to lead the Center

While I am writing my director’s message, I sit in the Maimonides Centre for Advanced Jewish Studies in Hamburg, Germany, where I will spend the remaining part of the summer diving into research with other scholars from around the world.

Leading the Carolina Center for Jewish Studies for the last nine years was a huge privilege for me. It provided the opportunity for me to get to know many of you and to learn so much about the Jewish history of UNC, the State of North Carolina, and beyond. It offered opportunities to discuss Jewish history and culture in all aspects, which also included difficult topics and conversations around antisemitism.

The Center’s first major conference on this theme in 2016 provided a starting point for continuous talks within the College and beyond and also helped to create the undergraduate course “Confronting Antisemitism,” which was taught for the third time this spring semester. I cherish the discussions with the students whenever I give my guest lecture in this class. (I discussed well-poisoning, blood libel, and host desecration in the Middle Ages, as they offer ways to discuss conspiracy theories now and then as well as Jewish responses to hatred and violence.)

As director, I also enjoyed bringing together different groups like the conference on “Wandering Objects” we organized together with the NC Museum of Art and the recent online discussion on Jewish history and Yiddish culture in Ukraine, with Daniel Kahn. But I equally enjoyed many small talks and encounters I had during my daily work. How else could I have known that Pettigrew Hall, where the Center is currently housed, was once a residence hall and there lived a Jewish student shortly after the Second World War who served as a G.I.? And how else could I hear directly from a donor who could not enroll at UNC because she was a woman?

This brings me back to Hamburg: Part of my travel guide to explore this city while I am here, is an email I received from Patricia Rosenmeyer about her family in Hamburg. I just visited the synagogue in which her father and uncle celebrated their bar mitzvah, and which serves now as a concert hall. History is complicated and the tasks of the Carolina Center for Jewish Studies to teach and research the history, culture, and religious traditions of Jews in their interactions with others promises to be demanding also in the future. I am grateful that I can pass this baton over to Patricia. I wish her and Karen Gajewski, who was just promoted to executive director of the Center, all the best and I thank you for all the support you have given me in the last years.

Professor, Department of Germanic and Slavic Languages and Literatures