Home / news / Southern Jews and the Lost Cause: Confederate Memory and Jewish Identity 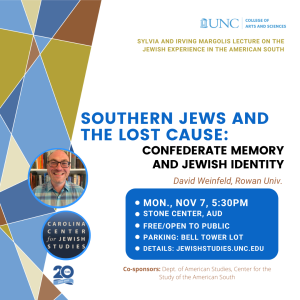 Join us for this in-person lecture:

Southern Jews and the Lost Cause: Confederate Memory and Jewish Identity

Sylvia and Irving Margolis Lecture on the Jewish Experience in the American South with David Weinfeld, Rowan University.

It is well-known that some Jews in the American South owned enslaved people of African descent and that at least two thousand Jewish men fought to preserve the oppressive institution by serving in the Confederate army. Less well-known is how Southern Jews interacted with the idea known as “The Lost Cause,” an ideology that emerged almost immediately after the Civil War.

David Weinfeld is an assistant professor in the department of Philosophy and World Religions at Rowan University.

Learn more about the event

Co-sponsored by: UNC Department of American Studies, UNC Center for the Study of the American South