This remote event requires registration on Eventbrite in order to receive the Zoom link. Registration is now open: https://nofairytale.eventbrite.com

Co-sponsored by the department of Germanic and Slavic languages and literatures and Carolina-Duke German studies.

In 1902, the father of modern Zionism, Theodor Herzl, published the German novel Altneuland (The Old-New Land). In the work, he depicted a future, model Jewish society in what was then Ottoman Palestine. Emblazoned on its title page, Herzl declared: “If you wish it, it is no fairy tale!” The phrase would soon become a key motto of the Zionist movement, and a few years later, the Hebrew title of the translated novel — Tel Aviv — would become the name of a newly erected city on the shores of the Mediterranean. Taking these events and their connection to a literary work seriously, this talk examines the vital role of German Jewish literature in early Zionism and the founding of the Jewish State. 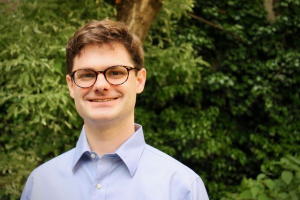 Joshua Shelly is a graduate student in the Carolina-Duke German Program writing his dissertation on German Jewish utopian literature and its role in the early Zionist movement. His work has been supported by fellowships from the Leo Baeck Fellowship Programme, the Berlin Program for Advanced German and European Studies and the Franz Rosenzweig Minerva Research Center at Hebrew University.