“Cleansing” Germany: Ideology, Space, and the Nazi Consolidation of Power

We are happy to co-sponsor this event that is hosted by NC German Studies Seminars:

“Cleansing” Germany: Ideology, Space, and the Nazi Consolidation of Power

Holocaust history has experienced its own “spatial turn” in the past decade, and important studies have examined the role space played in ethnic cleansing and genocide in central Europe during the 1940s. This project shifts the analytic focus from wartime spatial planning to everyday spaces in 1930s Germany to illuminate how the Nazi regime first formulated and began implementing policies of spatial cleansing. National Socialists believed that all of Germany had been contaminated by “Judeo-Bolshevism” in the post-World War I era. In 1933, the Nazi regime and its allied architects, city planners, bureaucrats, and ordinary citizens set out to “cleanse” and remake everyday spaces according to this worldview. The talk explores how antisemitic notions of a Germany infected by Jews immediately and forcefully instigated efforts to render Germany physically, symbolically, and rhetorically “judenrein” during the Nazi consolidation of power.

TERESA WALCH is an Assistant Professor of Modern European History at the University of North Carolina at Greensboro. Her research examines the politics of space and place in modern Germany. Her book manuscript, Degenerate Spaces: The Coordination of Space in Nazi Germany, investigates the relationship between Nazi ideology and spatial practices between 1933-1945. She is also co-editing a volume entitled Räume der deutschen Geschichte, set to appear with Wallstein Verlag in 2021. 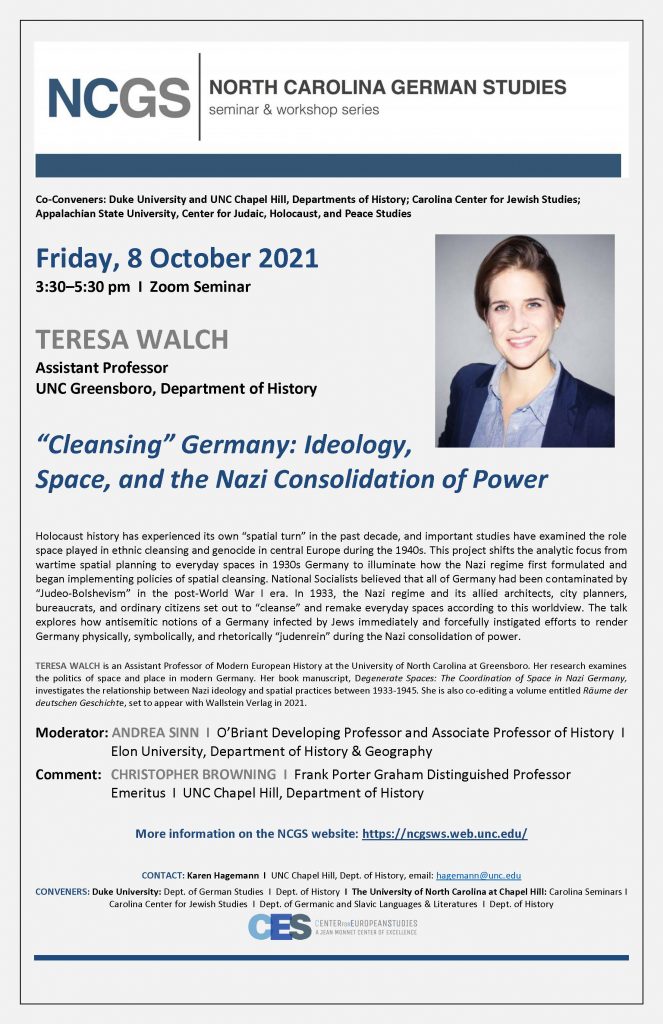