REMOTE: Jews, and the Transformation of American Folklore 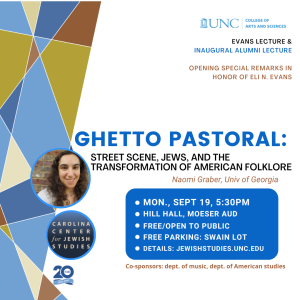 If you missed this event, you can view it on our YouTube channel.

This is now a remote/Zoom event. Remote-only event.

Registration is required on Eventbrite site in order to get the Zoom link.
https://evanslecture.eventbrite.com

In 1947, Kurt Weill, Elmer Rice, and Langston Hughes’s Street Scene opened on Broadway. Although Weill referred to the work as a “Broadway opera,” Street Scene embodies what Michael Denning calls a “ghetto pastoral,” a genre that arose in the early 1930s depicting violent, yet innocent coming-of-age stories in ethnic or black urban working-class neighborhoods, combining naturalism and allegory to prove that urban communities could produce a new style of folk hero. Within this pastoral-folkloric atmosphere, Jewish characters take center stage. Sam Kaplan, the Jewish hero of “Street Scene,” is the moral center of the community, and sings in the most folkloric genres, cementing his status as a true “American.” He also presents a strong contrast to his father, an ardent Communist, proving that second-generation immigrants could assimilate, even if their parents could not. Still, notes and drafts for Street Scene reveal that Weill and Rice struggled with both characters. Over the course of production, Sam became more traditionally “heroic,” while his father’s Communist leanings were significantly toned down. “Street Scene” thus demonstrates the difficulties of inserting Jews into American folklore in a post-Holocaust United States. 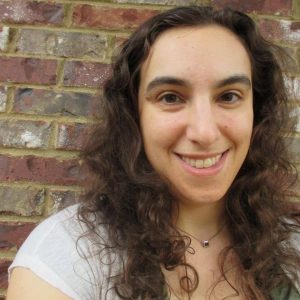 Naomi Graber is an associate professor at the University of Georgia. She earned her Ph.D. from the University of North Carolina at Chapel Hill in 2013 with the dissertation “Found in Translation: Kurt Weill on Broadway and in Hollywood, 1935–1939,” which earned her the Glen Haydon Award for an Outstanding Dissertation in Musicology. She is the recipient of the Rhonda A. and Robert Hillel Silver Award from the Carolina Center for Jewish Studies, as well as fellowships to study at the Library of Congress, the Arnold Schönberg-Centre in Vienna, and the Kurt Weill Foundation. Her book “Kurt Weill’s America,” from Oxford University Press explores the composer’s U.S. career during the Great Depression, World War II, and early Cold War in light of his status as an immigrant, was published in 2021. Her work has been supported by the Kurt Weill Foundation and UGA Willson Center for the Humanities. Her publications on the politics of musical theatre have appeared in Studies in Musical Theatre, Musical Quarterly, the Journal for the Society of American Music, and on several blogs, including Musicology Now, and Trax on the Trail.