Home / news / The Nazi Holocaust & the Exile of Yiddish

The Holocaust and the new post-war order brought about a near-total end to the Yiddish culture that had sustained Eastern European Jewry for centuries. This talk, by Wake Forest University historian Barry Trachtenberg, examines the complicated history of Di algemeyne entsiklopedye (The General Encyclopedia, Berlin, Paris, New York: 1932-1966), which was one of the only successful efforts to bridge the pre- and post-Holocaust eras, and to link Yiddish speakers to one another after they were scattered to the far reaches of the globe. Initially conceived in the early 1930s as a tool to modernize the many millions of Yiddish readers, the encyclopedia became a means to work through the growing crises prompted by Nazism, the murder of European Jewry, and eventually, the effort to assist Yiddish-speaking Jews resettle into their new lives after the war. 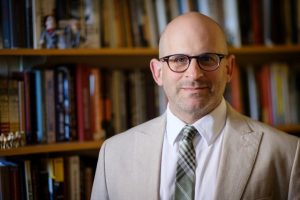 Barry Trachtenberg is the Rubin Presidential Chair of Jewish History at Wake Forest University. He is the author of The United States and the Nazi Holocaust: Race, Refuge, and Remembrance (Bloomsbury, 2018) and The Revolutionary Roots of Modern Yiddish, 1903-1917 (Syracuse, 2008).