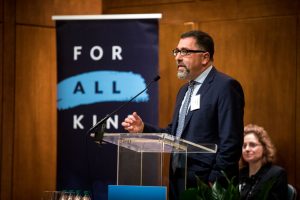 Jonathan Hess, professor and chair of the department of Germanic and Slavic languages and literatures, passed away suddenly on April 9, 2018.

Hess had been department chair since 2016 and the Moses M. and Hannah L. Malkin Distinguished Professor of Jewish History and Culture since 2012. He had served as director for the Carolina Center for Jewish Studies for 10 years, building it into one of the premier Jewish Studies programs in the country.

Hess was a renowned scholar on German cultural, intellectual and literary history from the 18th century on, with particular interests in both German-Jewish studies and the legacy of the Enlightenment. He was the author of four books and numerous peer-reviewed articles on Jewish-German culture, politics and anti-Semitism.

“I will remember Jonathan for his love of family and his commitment to our students and to advancing Jewish studies at Carolina,” said Kevin Guskiewicz, dean of the College of Arts & Sciences [now Chancellor]. “Please keep Jonathan’s wife, [UNC School of Law professor] Beth Posner, and their three daughters in your thoughts during this difficult time.”

Hess’ other service to the university included being a member of the Advisory Committee on Undergraduate Admissions and representing the College on the Appointments, Promotions and Tenure Committee. He served on Faculty Council from 2009 to 2013.

He had been a member of the Carolina faculty since 1993, joining it immediately after earning his doctorate in comparative literature and literary theory from the University of Pennsylvania.

The Center’s faculty organized an academic seminar in April 2019 in honor of Jonathan and his research interests.  Details.

We’re so grateful for the many inquiries about participating in initiatives to honor Jonathan’s life, scholarship, and service. To honor Hess’s commitment to supporting junior scholars and cultivating future faculty leaders, memorial gifts may be made to the Jonathan M. Hess Career Development Term Assistant Professorship in the College. The fund will support a term professorship for a tenure-track assistant professor in the fine arts and humanities. Click here to make an online gift. 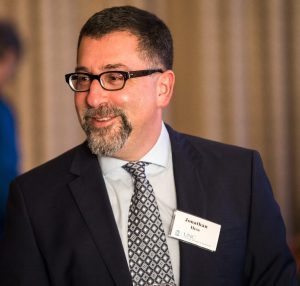 Jonathan M. Hess led the Carolina Center for Jewish Studies for its first 10 years, transforming a tiny, months-old start-up into a thriving, national leader and surpassing all the program goals that initially seemed so audacious. He channeled his unwavering dedication and strong leadership into a powerful vision for what Jewish Studies at Carolina could, and should, become. For Jonathan, it represented an opportunity to envision an academic program that integrated Jewish Studies into the liberal arts. He defined Jewish studies as an interdisciplinary field that studied the history, culture, and religious traditions of Jews in their interactions with others from the ancient period to the present. A committed educator, Jonathan led efforts to create a new Jewish studies major for undergraduates and a certificate in Jewish studies for graduate students. He personally mentored students and young faculty alike, and his dry sense of humor and honest viewpoints made it easy for others to approach him for ideas and feedback. He was a successful fund raiser, helping build support for endowed faculty chairs, named lectureships and student support that, in turn, made Carolina the fastest growing Center for Jewish Studies in the nation. Jonathan’s connections across the campus and with alumni, friends and the general community, have created a lasting base of support that will sustain the Center in perpetuity. It is impossible for us, at this time, to imagine the Center’s future without Jonathan’s input, but we are committed to building on all that he achieved and to ensuring that this Center—that he cared about so deeply—continues to thrive and surpass all expectations.

Jonathan gave a short talk during our 15th Anniversary Faculty Showcase on March 25, 2018. We have posted a video of this talk on our Vimeo site.