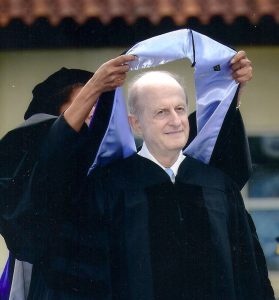 We are so sad to learn that Eli N. Evans,’58 founding chair of the advisory board for the Carolina Center for Jewish Studies, passed away on July 26, 2022. Evans led the advisory board for much of the Center’s first decade (2003-2009), helping Carolina transform a bold idea into a thriving academic Center. His leadership, dedication and audacious vision for an interdisciplinary Jewish studies center at his alma mater inspired other alumni and friends to join the cause, and ultimately created a series of endowed faculty chairs, named lectureships, and funds for faculty and student support. As a result, the Center experienced a remarkable trajectory of growth and expansion of programs.

“So much of what we do today is made possible because of the leadership and creative vision of Eli Evans,” said Patricia A. Rosenmeyer, director of the Carolina Center for Jewish Studies. “It is impossible to imagine that we’d have the Center we have today without the benefit of Eli’s wisdom, energy and imagination. Carolina will benefit from his generous legacy in perpetuity because of Eli’s strong commitment to this campus and to building the Carolina Center for Jewish Studies, even when few others thought it could be done.”

Evans also was a frequent guest visitor to Jewish studies classrooms, where he shared his personal experience of growing up Jewish in the American south. Th 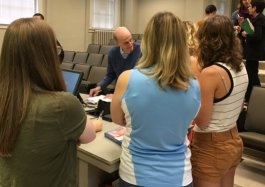 ese experiences are captured in two of his books: The Provincials: A Personal History of Jews in the South (Univ. of North Carolina Press, 1973) and The Lonely Days Were Sundays (Univ. of Mississippi Press,1993).

“Eli spoke in my southern Jewish history seminar each fall, preferably on a date that coincided with a Carolina home football game,” recalled Marcie Cohen Ferris, emerita professor, department of American studies. “He arrived in class wearing his Carolina baseball cap, and promptly borrowed my dog-eared copy of The Provincials. Each year, students were assigned the text and wrote a critical essay about it. Everyone sat mesmerized as Eli told stories of his Jewish South, woven into the region’s history.  Eli always pushed my students to understand the power of their own lives as change makers and leaders. At the end of class, he continued to chat with students until l said, ‘They have to GO, Eli—! They’ll be late for their next class!’ Then, without prompting, the class stood, gave him a standing ovation, and got in line to have their copies of The Provincials autographed and their photograph made with Eli, and at least once with Eli’s son Josh, too.  After class, as we walked through campus toward the Carolina Inn, Eli asked, ‘How did I do?’ ‘Was it ok?’ And I answered, ‘It was more than OK. It was life changing.’”

Evans completed his undergraduate studies at Carolina in 1958 and then earned his law degree from Yale Law School. He received an honorary Doctorate of Laws degree at Carolina’s May 2009 commencement ceremony. The Evans family name is connected to two endowments at the Center: Eli’s parents are honored with the Sara and E.J. Evans Distinguished Professorship and Eli is honored with the Eli N. Evans ’58 Distinguished Lecture in Jewish Studies. The next Evans Lecture is September 19th, and we invite the community to join us for this special event. Details: https://jewishstudies.unc.edu/event/graber/

“I was saddened by the news about Eli Evans’ death. As the founding chair of the Center’s advisory board, he followed all our activities and frequently asked about our teaching and research work and student enrollments and our expanding activities. His interest in anything the Center was doing never stopped,” said Ruth von Bernuth, former director of the Carolina Center for Jewish Studies. “It was his interest in people and his love for Carolina which helped to start the Center. A thriving Jewish Studies academic center very much belonged to Eli’s vision of UNC.”

The leadership, faculty and staff at the Carolina Center for Jewish Studies remain committed to furthering Eli’s vision and ensuring that the Center will continue to serve Carolina’s campus community and the general public.

Please read more about Eli Evans. This link also leads to the schedule for funeral service, burial and shiva.
https://hudsonfuneralhome.com/obituary/eli-evans/ 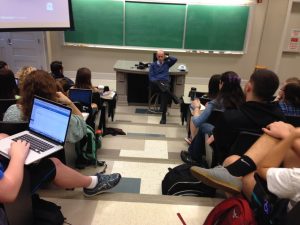 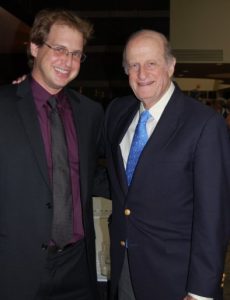 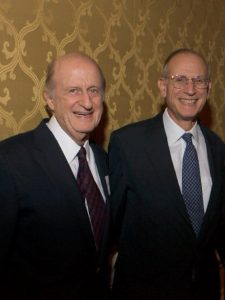 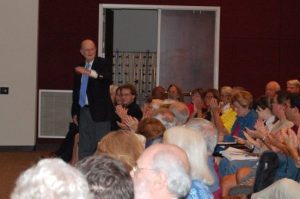 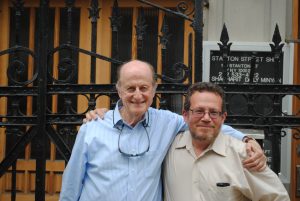 Receiving an honorary degree, 2009; classroom visits at Carolina; with Professor Marienberg, the inaugural Sara and E.J. Evans Fellow, 2009; with Ambassador Eizenstat at a celebration for the Center’s Eizenstat endowed faculty chair; greeting attendees at an Evans Lecture, 2009; with Jonathan Boyarin on a walking tour of the Lower East Side, 2010.